Android is an operating system based on the Linux kernel and designed primarily for touchscreen mobile devices such as smartphones and tablet computers. Android OS has taken over the world of mobile devices and is growing rapidly the last few years. Android’s user interface is based on direct manipulation, using touch inputs that loosely correspond to real-world actions, like swiping, tapping, pinching and reverse pinching to manipulate on-screen objects. The response to user input is designed to be immediate and provides a fluid touch interface. In this course, you will get a look at the fundamentals of Android UI design. You will understand user input, views and layouts, as well as adapters and fragments.

Furthermore, you will learn how to add multimedia to an app and also leverage themes and styles. Of course, all these are tied up with a sample application, which you will build from scratch.

Want to create a kick-ass Android App ?
Subscribe to our newsletter and download the Android UI Design mini-book right now!
With this book, you will delve into the fundamentals of Android UI design. You will understand user input, views and layouts, as well as adapters and fragments. Furthermore, you will learn how to add multimedia to an app and also leverage themes and styles!
I agree to the Terms and Privacy Policy
Sign up 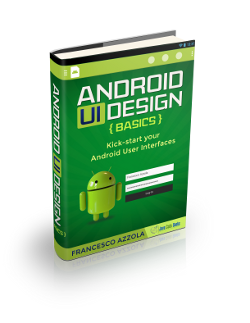 Francesco has also developed several Android apps some of them are published on Google Play.

One of the main key components of an app is of course the UI. In this lesson, you will get introduced in Android UI design. You will get a high level overview and then you will explore the App Structure and various UI patterns.

All the Standard components are discussed next, including Views, ViewGroups, Fragments and Activities. These are the main building blocks of creating UIs with Android. Additionally, Android provides several standard UI controls, Layout managers and widgets that we can be used without much effort and can help creating apps fast and simply.

Finally, an important aspect of UI design is definitely the portability of the app. Android is a very popular system, used by smartphones and tablets. In order to provide a great, uniform use experience, we have to take into account that our apps can run on variety of devices with different screen resolution and physical screen sizes.

There are some key concepts to take under consideration before coding an app, like Screen size, Density, Orientation and Density independent pixel. Following the best practices to support all devices is crucial and this lesson will guide you through them.

We are now ready to delve into the more hands-on stuff. In this lesson, you will get introduced to the Views, the main building blocks of Android UIs. You will learn about the major built-in components like TextView and ImageView, as well as various input controls like buttons,checkboxes,textfields etc.

In this lesson, we will mainly deal with Layouts, special views that acts as containers in our application. We will focus on the different kinds of layouts and how those can be used to achieve multiple screens support. Additionally, we will learn about Fragments, which comprise an elegant way of building well-designed applications with consistent user experience.

In this lesson, we will focus in adding Multimedia to an Android app. The Android SDK provides a set of APIs to handle multimedia files, such as audio, video and images. Moreover, the SDK provides other API sets that help developers to implement interesting graphics effects, like animations and so on. This is a very cool lesson, full of hands-on examples!

In this lesson, we will describe how we can use styles and themes. A theme is a set of styles and can be applied to the whole app or to a single Activity. This is an important aspect when developing an app because using styles and themes, we can brand our app and have an harmonious look.

This is the concluding lesson in our course. After having been introduced to Android OS, having discussed views (the main building block of UIs) and layouts and added multimedia to our app, we are now ready to sum it all up by building a full application from scratch. As an example, we will build a To Do app: this is a simple app where we can add todo items and manage them. We will cover how to create the UI layout structure, how to add widgets so that we can show text messages to the user and how to accept user input. An important aspect we will consider is how to build an app that can be used on several devices with different screen size and resolutions.

I have found best ui design tutorial, you can follow it: http://www.viralandroid.com/

“Want to create a kick-ass Android App?
Subscribe to our newsletter and download the Android UI Design mini-book right now!”

Hello Techiediaries,
You need to join our newsletter here: http://eepurl.com/xRlkj
After you enter a VALID email address, you will need to verify your subscription.
A verification email will be sent to you and after you successfully verify your email,
you will get a final welcome email which will contain the links to download the ebooks!