In this detailed Resource page, we feature an abundance of Eclipse IDE Tutorials!

Eclipse is an integrated development environment (IDE) used in computer programming, and is the most widely used Java IDE. It contains a base workspace and an extensible plug-in system for customizing the environment. Eclipse is written mostly in Java and its primary use is for developing Java applications, but it may also be used to develop applications in other programming languages via plug-ins, including Ada, ABAP, C, C++, C#, Clojure, COBOL, D, Erlang, Fortran, Groovy, Haskell, JavaScript, Julia, Lasso, Lua, NATURAL, Perl, PHP, Prolog, Python, R, Ruby (including Ruby on Rails framework), Rust, Scala, and Scheme. It can also be used to develop documents with LaTeX (via a TeXlipse plug-in) and packages for the software Mathematica. Development environments include the Eclipse Java development tools (JDT) for Java and Scala, Eclipse CDT for C/C++, and Eclipse PDT for PHP, among others.

The initial codebase originated from IBM VisualAge. The Eclipse software development kit (SDK), which includes the Java development tools, is meant for Java developers. Users can extend its abilities by installing plug-ins written for the Eclipse Platform, such as development toolkits for other programming languages, and can write and contribute their own plug-in modules. Since the introduction of the OSGi implementation (Equinox) in version 3 of Eclipse, plug-ins can be plugged-stopped dynamically and are termed (OSGI) bundles

Eclipse software development kit (SDK) is free and open-source software, released under the terms of the Eclipse Public License, although it is incompatible with the GNU General Public License. It was one of the first IDEs to run under GNU Classpath and it runs without problems under IcedTea.

Want to master Eclipse IDE ?
Subscribe to our newsletter and download the Eclipse IDE Handbook right now!
In order to help you master Eclipse, we have compiled a kick-ass guide with all the basic features of the popular IDE! Besides studying them online you may download the eBook in PDF format!
I agree to the Terms and Privacy Policy
Sign up 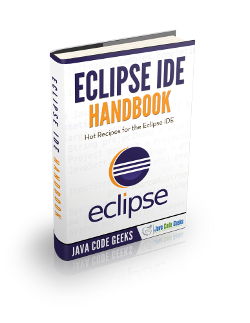 Note
If you wish to build up your Eclipse IDE knowledge first, check out our Eclipse Tutorial for Beginners.

Simple examples based on Eclipse IDE