In this detailed Resource page, we feature JAXB Tutorials!

Java Architecture for XML Binding (JAXB) is a software framework that allows Java developers to map Java classes to XML representations. JAXB provides two main features: the ability to marshal Java objects into XML and the inverse, i.e. to unmarshal XML back into Java objects. In other words, JAXB allows storing and retrieving data in memory in any XML format, without the need to implement a specific set of XML loading and saving routines for the program’s class structure. It is similar to xsd.exe and XmlSerializer in the .NET Framework.

JAXB is particularly useful when the specification is complex and changing. In such a case, regularly changing the XML Schema definitions to keep them synchronised with the Java definitions can be time consuming and error-prone.

JAXB 1.0 was developed under the Java Community Process as JSR 31. In 2006 JAXB 2.0 was released under JSR 222 and Maintenance Release 2 released in December 2009. Reference implementations for these specifications are available under the CDDL open source license at java.net.

The tool “xjc” can be used to convert XML Schema and other schema file types (as of Java 1.6, RELAX NG, XML DTD, and WSDL are supported experimentally) to class representations. Classes are marked up using annotations from javax.xml.bind.annotation.* namespace, for example, @XmlRootElement and @XmlElement. XML list sequences are represented by attributes of type java.util.List. Marshallers and Unmarshallers are created through an instance of JAXBContext.

In addition, JAXB includes a “schemagen” tool that can essentially perform the inverse of “xjc“, creating an XML Schema from a set of annotated classes.

Note
If you wish to build up your JAXB knowledge first, check out our JAXB Tutorial for Java XML Binding – The ULTIMATE Guide.
Want to be a JAXB Master ?
Subscribe to our newsletter and download the JAXB Ultimate Guide right now!
In order to help you master XML Binding with JAXB, we have compiled a kick-ass guide with all the major JAXB features and use cases! Besides studying them online you may download the eBook in PDF format!
I agree to the Terms and Privacy Policy
Sign up 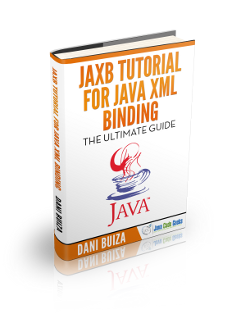 Simple examples based on Java Architecture for XML Binding

Learn how to use JAXB with RESTEasy and Jettison