Jakub is an experienced Java[EE] developer working for a lean & agile consultancy in Norway. He is interested in code quality, developer productivity, testing, and in how to make projects succeed.

Having [automated] unit/integration/functional/… tests is great but it is too easy for them to become a hindrance, making any change to the system painful and slow – up to the point where you throw them away. How to avoid this curse of rigid tests, too brittle, too intertwined, too coupled to the implementation details?

Surely following the principles of clean code not only for production code but also for tests will help but is it enough? No, it is not.

Based on a discussion on our recent course with Kent Beck, I think that the following three principles below are important to have decoupled, easy to evolve tests:

(Disclaimer: All good ideas here come from Kent Beck and my course-mates. All misconceptions are genuinely mine.)

If you think about your tests as telling a story – single test methods telling simple stories about small features, whole test classes about particular larger-scale features, the whole test suite about your software then you end up with better, more decoupled, and easier to understand tests. This implies that when somebody reads the test, s/he feels as if reading a story.

This actually corresponds nicely to what Gojko Adzic is teaching about acceptance tests. i.e. that they should be a “living documentation” of the system for the use of the business users, and this is their by far greatest benefit (and not, as it is usually believed, that you have a set of regression tests or that you can show that the system works).

Why should you write your tests as stories?

How should you write tests to read as stories?

A (rather conceived) example:

(Sidenote: Also the xUnit Patterns book states Tests as Documentation as one of the main goals of testing.)

For discussing this JUnit perhaps isn’t a good example – it is very special because it uses itself to test its behavior and the tests must fail even if there is a defect in the test framework – but still we can perhaps learn something from it. What surprised me a lot is that it has a high number of integration tests*, around 35%. The recipe for long-lived, evolvable tests seems to be to write:

(*) What is an integration test? According to one of the possible definitions, unit test is a test where seeing the failure message you can immediately pinpoint the piece of code or even line where the problem originated. Contrary to that, if an integration test fails, you usually can’t say why and have to dig into it or perhaps debug it a little.

3. More functional composition of the processing (i.e. kill the mocks!)

Do you need a mocking framework to write tests? Then you might be doing it in a suboptimal way. (Disclaimer: There surely are different yet equally good approaches to nearly anything :-) .) When Kent was explaining the way he composes his programs he draw a picture similar to this one: 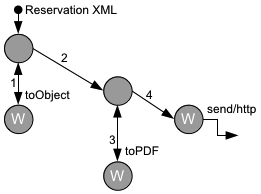 What is interesting about it? It is not the typical network of objects where one object does something and calls another one to *continue* with the processing or to do a part of it. It is composed of two types of objects: workers that receive an input and produce an output, and integrators that delegate the work to individual workers and pass it from one to another with minimal logic of their own. The workers are very functional and thus easy to test with true unit tests (and as said, if a different implementation is required, you just may throw the worker with its test away and create a new one) while the integrators should be as simple as possible (so the likelihood of a defect is smaller) and are covered by integration tests. (Everything fits nicely together, doesn’t it?)

An example worker is JUnit’s Statement (f.ex. FailOnTimeout), which replaced a series of nested function calls used previously. The role of integrator is taken by a Runner.

Given that most of bigger business software systems live for quite a number of years, it’s essential to write tests in such a way that they enhance and not limit the evolvability of the system. It is not easy but we must make efforts towards that.

To succeed we must structure our code and tests in a particular way and approach our test methods, test classes, and test suites as telling stories about what the code under test does.

Reference: Principles for Creating Maintainable and Evolvable Tests from our JCG partner Jakub Holy at the “The Holy Java” blog.