With the advent of Continuous Integration and Continuous Delivery , our builds are split into different steps creating the deployment pipeline. Some of these steps can be for example compile and run fast tests, run slow tests, run automated acceptance tests, or releasing the application, to cite a few.

The final steps of our deployment pipeline, implies a deployment of our product (in case of JEE project a war or ear) to production-like environment, for UAT or to production system when product is released.
In this post we are going to see how we can configure Jenkins to manage the deployment of a Java Enterprise Application correctly.

First thing to do is creating the application, in this case a very simple web application in Java (in fact is only one jsp which prints a Hello World!! message) and mavenize it to create a war file ( bar.war) when package goal is executed.

Then we need to create a Jenkins job (called bar-web) which is the responsible of compiling, and running unit tests.

After this job would come other jobs like running integration tests, running more tests, static code analysis (aka code quality), or uploading artifacts to artifacts repository but won’t be shown here.
And finally, the last steps which imply deploying previous generated code to staging environment (for running User Acceptance Tests for example) and after key users give the ok, deploying to production environment.
So let’s see how to create these final steps in Jenkins. Note that binary file created in previous steps ( bar-web in our case) must be used in all these steps. This is because of two reasons, the first one is that your deployment pipeline should be run as fast as possible and obviously compiling in each step the code is not the best way to get it, the second one is that each time you compile your sources, increases the chance of not being compiling sources of previous steps. To achieve this goal we can follow two strategies, the first one is uploading binary files to artifact repository (like Nexus or Artifactory) and get from there in each job. The second one is using copy-artifacts Jenkins plugin to get binary files generated by previous step.

Let’s see how to configure Jenkins for the first approach.

Using artifact repository approach, requires that you download the version we want to deploy from repository and then deploy it to external environment; in our case deploying to a web server. All these steps are done by using maven-cargo-plugin.

Then we only have to create a new Jenkins job, named bar-to-staging, which will run cargo:redeploy Maven goal, and Cargo plugin will be the responsible to deploy bar-web to web server.

This approach has one advantage and one disadvantage. The main advantage is that you are not bound to Jenkins, you can use Maven alone, or any other CI that supports Maven. The main disadvantage is that relies on artefacts repository, and this plan a new problem, deployment pipeline involves many steps, and between these steps (normally if you are building a snapshot version), a new artefact could be uploaded to artefacts repository with same version, and use it in the middle of pipeline execution. Of course this scenario can be avoided by managing permissions in artefact repository.

The other approach is use Jenkins plugin, called copy-artifact-plugin. In this case Jenkins acts as an artefact repository, so artifacts created in previous step are used in next step without involving any external repository. Using this approach we cannot use maven-cargo-plugin, but we can use deploy- jenkins-plugin in conjunction with copy-artifacts-plugin.

So let’s see how to implement this approach. 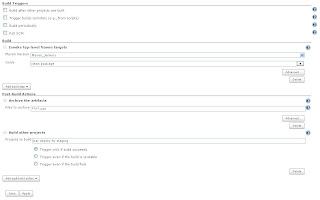 First thing is create a Jenkins build job ( bar-web), which creates the war file. Note that two Post-build actions are defined, first one is Archive the artifacts, which is used to store generated files so copy artifacts plugin can copy them to another workspace. The other one is Build other projects, which in this case, calls a job which is responsible of deploying war file to staging directory ( bar deploy-to-staging). 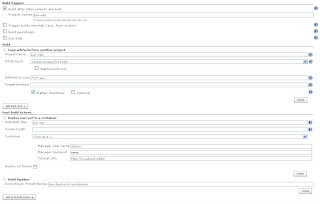 For this second build job, you should configure Copy artifacts plugin to copy previous generated files to current workspace, so in Build section, in Copy artifacts from another project section, we set from which build job we want to copy the artifact (in our case bar-web) and which artifacts we want to copy. And finally in Post-build actions section, we must configure which file should be deployed to Tomcat ( bar.web), remember that this file is the compiled and packaged by previous build jobs, and finally set Tomcat parameters. And execution pipeline looks something like:

Note that a third build job has been added which deploys war file to production server.

This second approach is the counter part of the first approach, you can be sure that the artefact used in previous step of pipeline will be the one used in all steps, but you are bounded to Jenkins/Hudson.

After file is deployed to server, acceptance tests or UAT tests can be executed without any problem.

I wish that now we can address the final steps of our deployment pipeline in a secure and better way.

Reference: Deploying JEE Artifacts with Jenkins from our JCG partner Alex Soto at the One Jar To Rule Them All blog.