Most of us we are using Jenkins/Hudson to implement Continuous Integration/Delivery, and we manage job orchestration combining some Jenkins plugins like build pipeline, parameterized-build, join or downstream-ext. We require configuring all of them which implies polluting the job configuration through multiple jobs, which takes the system configuration very complex to maintain.

Build Flow enables us to define an upper level flow item to manage job orchestration and link up rules, using a dedicated DSL.

Then you can go to Jenkins -> New Job and you will see a new kind of job called Build Flow. In this example we are going to name it build-all-yy.

And now you only have to program using flow DSL how this job should orchestrate the other jobs.
In ‘ Define build flow using flow DSL‘ input text you can specify the sequence of commands to execute. 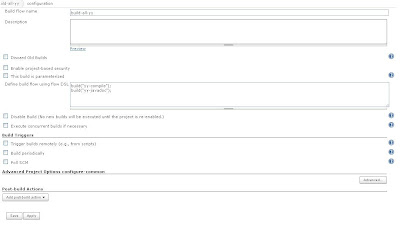 In current example I have already created two jobs, one executing clean compile goal ( yy-compile job name) and the other one executing javadoc goal ( yy-javadoc job name). I know that this deployment pipeline is not real in a true environment but for now it is enough.
Then we want javadoc job running after project is compiled.

To configure this we don’t have to create any upstream or downstream actions, simply add next lines at DSL text area:

Save and execute build-all-yy job and both projects will be built in a sequential way.
Now suppose that we add a third job called yy-sonar which runs sonar goal that generates code quality sonar report. In this case it seems obvious that after project is compiled, generation of javadocs and code quality jobs can be run in parallel. So script is changed to:

This plugin also supports more operations like retry (similar behaviour of retry-failed-job plugin) or guard-rescue, that it works mostly like a try+finally block. Also you can create parameterized builds, accessing to build execution or printing to Jenkins console. Next example will print build number of yy-compile job execution:

And finally you can also have a quick graphical overview of the execution in Status section. It is true that could be improved more, but for now it is acceptable, and can be used without any problem. 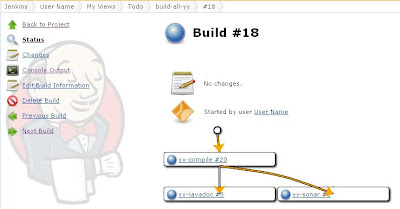 Build Flow plugin is in its early stages, in fact it is only at version 0.4. But will be a plugin to be considered in future, and I think it is good to know that it exists. Moreover is being developed by CloudBees folks so it is a guarantee of being fully supported by Jenkins.

Reference: Build Flow Jenkins Plugin from our JCG partner Alex Soto at the One Jar To Rule Them All blog.