Recently, I was working on one product which required replicated caching. Caching provider was already decided – EhCache, and the remained was a question about transport. Which one is the best option? By the best option here I mean just the one which has better performance. The performance measurement was done just between two of available transports – JGroups and RMI, others were not considered, sorry.

Replication was tested between two nodes. The main goal was to understand how increase of message data size and total number of messages affects performance. Another goal was to find the point where replication performance getting really bad. Latter is not that easy, because test used limited amount of memory and non-leaner performance deterioration could be caused by exhaust of free heap space. Below are memory size and software versions used to run the test:

The test itself is very simple. One node puts some number of elements with some size in the cache, other node reads all these elements. The test output is the the time required to read all elements. Timer starts just after first element is read.

The first test creates 10000 elements for each iteration. The variable is the message size, which increased twice on each iteration. On the first iteration size is 1280 bytes, on the last one – 327680 bytes (320 Kb). It means that final iteration with 10000 elements, where each size was 320 Kb will transfer approximate 3Gb of data. The tests have shown that EhCache copes very well with increasing size of the element and the slowdown was approximately proportional to the size of transferred data, which can be seen on the graph: 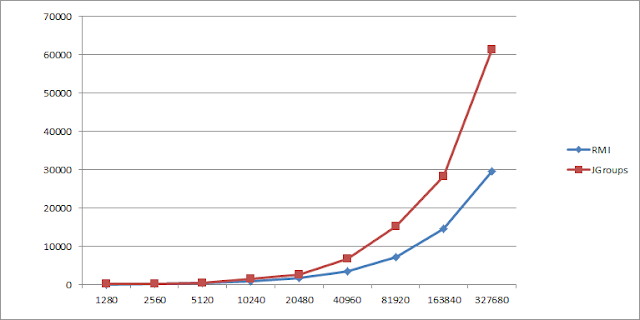 Here y-axis is time required for transfer in milliseconds and x-axis the the size of the element. No need to give much comments. RMI definitely looks better than JGroups.

In the seconds test, the variable was number of elements and the size of the element stayed constant and equal to 1280 bytes. As in previous test the number of messages was multiplied by two in each iteration and the amount of data transferred in final iteration was the same 3Gb. Graph below show how did it go: 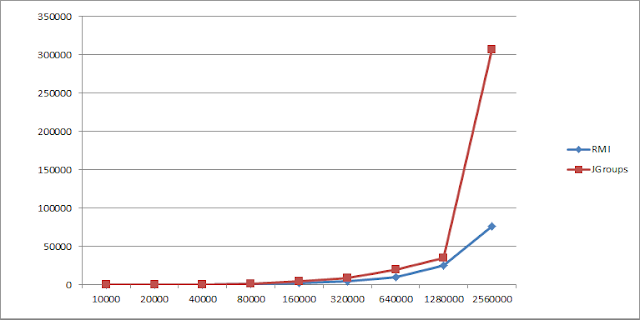 As in previous graph, y-axis is the time require to transfer all elements in one iteration. X-axis is the number of elements. Again, it can be seen that RMI is the leader. I believe hat JGroups hit the heap at the latest iteration, that’s why it performed so bad. It means that JGroups has more memory overhead per element. For the once, who do not trust (I woulnd’t ;) ) to my results and want to try it yourself, here are sources and configuration.

And, as conclusion… Well, RMI and JGroups both are acceptably fast. JGroups is definitely more memory consuming, which means one can hit a problem using it with big amounts of data. RMI, on the other hand uses TCP, instead of UDP, which, with big amount of nodes, may cause higher network load. Latter, unfortunately, is not covered by the test by any means and the real impact is not clear.

Can you help me?

With monthly unique visitors and over authors we are placed among the top Java related sites around. Constantly being on the lookout for partners; we encourage you to join us. So If you have a blog with unique and interesting content then you should check out our JCG partners program. You can also be a guest writer for Java Code Geeks and hone your writing skills!
Java Code Geeks and all content copyright © 2010-2020, Exelixis Media P.C. | Terms of Use | Privacy Policy | Contact
wpDiscuz
1
0
Would love your thoughts, please comment.x
()
x
| Reply