I continue to write tips for perfomance optimization of websites. The last post was about jQuery objects. This post is about data URIs. Data URIs are an interesting concept on the Web. Read ” Data URIs explained” please if you don’t know what it does mean. Data URIs are a technique for embedding resources as base 64 encoded data, avoiding the need for extra HTTP requests. It gives you the ability to embed files, especially images, inside of other files, especially CSS. Not only images are supported by data URIs, but embedded inline images are the most interesting part of this technique. This technique allows separate images to be fetched in a single HTTP request rather than multiple HTTP requests, what can be more efficient. Decreasing the number of requests results in better page performance. “Minimize HTTP requests” is actually the first rule of the ” Yahoo! Exceptional Performance Best Practices“, and it specifically mentions data URIs.

” Combining inline images into your (cached) stylesheets is a way to reduce HTTP requests and avoid increasing the size of your pages… 40-60% of daily visitors to your site come in with an empty cache. Making your page fast for these first time visitors is key to a better user experience.”

Data URI format is specified as

We are only interesting for images, so that mime types can be e.g. image/gif, image/jpeg or image/png. Charset should be omitted for images. The encoding is indicated by ;base64. One example of a valid data URI:

HTML fragments with inline images like the above example are not really interesting because they are not cached. Data URIs in CSS files (style sheets) are cached along with CSS files and that brings benefits. Some advantages describing in Wikipedia:

Furthermore, data URIs are better than sprites. Images organized as CSS sprites (many small images combined to one big) are difficult to be maintained. Maintenance costs are high. Imagine, you want to change some small images in the sprite, their position, size, color or whatever. Well, there are tools allowing to generate sprites, but later changes are not easy. Especially changes in size cause a shift of all positions and a lot of CSS changes. And don’t forget – a sprite still requires one HTTP request :-).

What browsers support data URIs? Data URIs are supported for all modern browsers: Gecko-based (Firefox, SeaMonkey, Camino, etc.), WebKit-based (Safari, Google Chrome), Opera, Konqueror, Internet Explorer 8 and higher. For Internet Explorer 8 data URIs must be smaller than 32 KB. Internet Explorer 9 does not have this 32 KB limitation. IE versions 5-7 lack support of data URIs, but there is MHTML – when you need data URIs in IE7 and under.

Are there tools helping with automatic data URI embedding? Yes, there are some tools. The most popular is a command line tool CSSEmbed. Especially if you need to support old IE versions, you can use this command line tool which can deal with MHTML. Maven plugin for web resource optimization, which is a part of PrimeFaces Extensions project, has now a support for data URIs too. The plugin allows to embed data URIs for referenced images in style sheets at build time. This Maven plugin doesn’t support MHTML. It’s problematic because you need to include CSS files with conditional comments separately – for IE7 and under and all other browsers. How does the conversion to data URIs work?

Configuration in pom.xml is simple. To enable this feature set useDataUri flag to true. Example:

Enough theory . Now, i will describe a practice part. I will expose some measurements, screenshots and give tips how large images should be, where CSS should be placed, what is the size of CSS file with data URIs and whether a GZIP filter can help here. Read on.

The first question is if it’s worth to put data URIs in style sheets? Yes, it’s worth. First, I would like to point you to this great article ” Data URIs for CSS Images: More Tests, More Questions” where you can try to test all three scenarios for your location. Latency is different depending on your location. But you can see a tendency that a web page containing data URIs is loaded faster. We can see one of the main tricks to achieve better performance with data URIs:

Split your CSS in two files – one with main data and one with data URIs only and place the second one in the footer. “In the footer” means close to the HTML body tag. Page rendering feels faster then because of the progressive rendering. In the second article you can see that this technique really accelerates page rendering. Style sheet in footer leads to a nice effect that large images download in parallel with the data URI style sheet. Why? Well, browser thinks stuff placed in footer can not have any impact on page structure above included files and doesn’t block resource loading. I also read that in this case all browsers (except old IE versions) render a page immediately without waiting until CSS with data URIs has been loaded. The same is valid for JavaScript files, as far as I know. Is it valid at all to put CSS files in page footer? Well, it’s not recommended in the HTML specification. But it’s valid in practice and it’s not bad at all in special cases. There is an interesting discussion on Stackoverflow ” How bad is it to put a CSS include in the middle of the body?”

The second tip is to use data URIs for small images, up to 1-2 KB. It’s not worth to use data URIs for large images. A large image has a very long data URI string (base64 encoded string) which can increase the size of CSS file. Files with a big size can block loading of other files. Remember, browsers have connection limitations. They can normally open 2-8 conection to the same domain. That means only 2-8 files can be loaded parallel at the same time. After reading some comments in internet I got an acknowledge about my assumption with 1-2 KB images.

We can soften this behavior by using of GZIP filter. A GZIP filter reduces size of resources. I have read that sometimes the size of an image encoded as data URI is even smaller than the size of original image. A GZIP filter is appled to web resources like CSS, JavaScript and (X)HTML files. But it’s not recommended to apply it to images and PDF files e.g. So, not encoded images aren’t going through the filer, but CSS files are going through. In 99%, if you gzip your CSS file, the resulting size is about the same as the regular image URL reference! And that was the third tip – use a GZIP filter.

I would like to show now my test results. My test environment: Firefox 11 on Kubuntu Oneiric. I prepared the showcase of PrimeFaces Extensions with 31 images which I added to the start page. These images display small themes icons in PNG format. Every image has the same size 30 x 27 px. Sizes in kilobytes lie in range 1.0 – 4.6 KB. CSS file without data URIs was 4.8 KB and with data URIs 91,6 KB. CSS files were included quite normally in HTML head section, by the way. I deployed showcases with and without data URIs on my VPS with Jetty 8 server. First without a GZIP filer. I cleared browser cache and opened Firebug for each showcase. Here results:

There isn’t much difference for subsequent calls (page refreshes), but there is a significant difference for the first time visiting. Especially onload event occurs faster with data URIs. No wonder. Images being loading after document is ready. Because they can not be loaded parallel (number of opened connection is limited), they get blocked. I took some pictures from Google Chrome Web Inspector. Below you can see timing for an image (vader.png) for the first (regular) case without data URI. 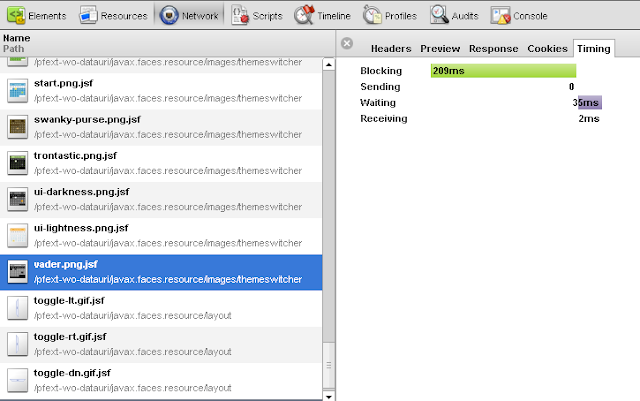 And the second case for the same image encoded as data URI. 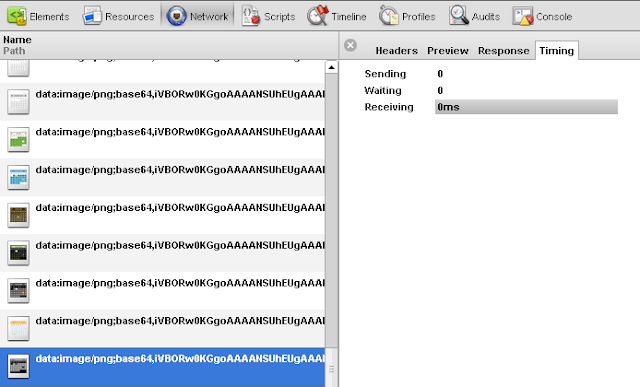 You see in the second picture there isn’t any blocking at all. Tests with a GZIP Filter didn’t have much impact in my case (don’t know why, maybe I haven’t too much resources). Average times after a couple of tests with empty cache:

So we have been implementing data-URIs for a while now. The only caveat we’ve discovered is that at times the “image” is still resulting in an image request. We have no idea why/how this is happening. Any insight? http://stackoverflow.com/questions/17279643/why-would-css-data-uris-be-logged-as-404-requests