Munish K Gupta is a senior architect working in a leading IT services company. His experience is in building Online Portals, SaaS Platforms, CRM Solutions and Transaction Processing Systems. He is author of the book - Akka Essentials.

Before I delve into what is an Akka, let us take a step back to understand how the concept of concurrent programming has evolved in the application development world. The applications have evolved from being large monolithic procedures to a more object oriented model. With the advent of Java EE and Spring framework, the application design evolved into more of a process or task based design model.

The EJBs or Pojo’s are designed to perform one single task. This model promoted the objects to be stateless (although state full session beans were allowed) in order to be able to handle the increasing load (aka scalable application). The overall business function request will get broken down to multiple beans (Ejbs or Pojos) which will process the information; the result from the beans will be aggregated and presented back to the requester. This model allowed the application to scale up. 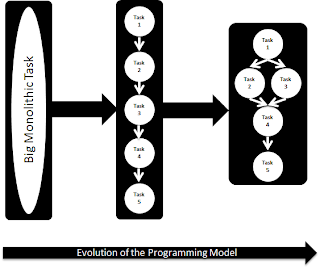 Now, when the same model needed to be applied to the Java application that does not make use of EJBs or application server containers, the available choice of technology or technique was to use multi-threaded programming.

Working with threads require a much higher level of programming skills, since dealing with state, locks , mutex etc is not easy skill. With Java EE 1.4 onwards, newer API in terms of ExecutionContext and Java 1.5 onwards concurrent data structure libraries (java.util.concurrent) were introduced. This allowed programmers to write programs that could be broken down into smaller tasks and run parallel on the underlying threads.

For an average java programmer, writing multi-threaded programs that could break a big process into smaller tasks and run those tasks in parallel to take advantage of the multiple cores is not so easy. Akka team abstracted this whole concept using an Actor model to another plane where writing programs that process tasks in parallel became slam dunk. The Akka abstraction model allowed programmers to write programs to take advantage of multiple cores and process hundreds of tasks in parallel. The Akka team borrowed concepts and techniques from ERlang to build “Let it Crash” fault tolerance model to allow applications to fail fast and recover from the failure as soon as possible.

Akka provides a scalable real time transaction processing library that allows your application to scale up, scale out and has fault tolerance.


Reference: What is Akka? from our JCG partner Munish K Gupta at the Akka Essentials blog.