Flavor of the month – Neo4j and Heroku

Neo4j launched a challenge earlier this year called “Seed the Cloud” to get folks to create templates or demo applications on Heroku using the Neo4j add-on. After much internal debate, I decided to enter, only to be thrown into despair for lack of an idea. The idea came to me while I was doing nothing in particular- to build a simple app that would help one find ingredients whose flavors complement one another.

Basically, you have these ingredients that pair really well together- knowing which ingredients have flavor affinities can produce some amazing new dishes.
The app allows you to add pairings with an ‘affinity’- how well they pair together- and search for an ingredient to find others that pair with it.

The app is built using Grails 2.0 for the front end, visualizations are the result of the very neat d3.js library, and interaction with Neo4j is done using the Neo4j REST Api.
The entire thing is deployed on Heroku (with the Neo4j add-on), while the source is available on github
To get started with Grails 2.0, Neo4j add-on and Heroku, read Aldrins post on the topic: http://thought-bytes.blogspot.in/2012/02/grails-20-heroku-and-neo4j-addon.html

How to deploy Flavorwocky locally as well as on Heroku is documented in the Readme.

The model lends itself very nicely to a graph- as you can see, it is very simple: 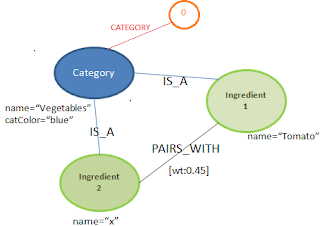 Every category is color coded- for convenience, it is stored as a property on the category node, but of course, it doesn’t have to be.

Flavorwocky was also picked as the basis for this challenge because it is a real world use case for a graph, and I wanted this entry to really focus on Neo4j primarily rather than supporting bells and whistles.

Set up
When the application starts up, we check if the database is empty. To do this, we perform a traversal from the reference node looking for any categories connected to it. If there are none, then we go ahead and create the set of categories by first creating their nodes, and then a relationship to the reference node. We also create the index “ingredients”, which is used to index ingredient names. Source code: https://github.com/luanne/flavorwocky/blob/master/grails-app/conf/BootStrap.groovy

To accomplish this, we used the Batch operation (note, this is still experimental).

Visualization:
We used d3.js to provide two visualizations for the search results. The “Explore” visualization is based on the Node-Link tree; we used a Cypher query to find all ingredients that pair with the searched ingredient up to 3 levels deep, transform it into the appropriate data structure, and render it as JSON. Note, although the visualization interactive, the fetching of data is not. The entire set of data for 3 levels is grabbed at once- a future enhancement would be fetching children only when you expand a node.

Although the tree is pretty slick, one shortcoming is that it is a tree- so if children are linked to each other, then you see multiple instances of that ingredient in the tree. Hence we tried another visualization to capture the interconnections between ingredients and also surface interesting facts such as flavor trios- there’s a pretty high chance that if you see a triangle in the network visualization, those three ingredients can be combined together well.

We used the Force directed graph for this. Again, a Cypher query came to the rescue (this time 5 levels deep to produce a richer model).

In both examples, the affinity of the pairing is used to calculate the length of the connector between ingredients, indicating shorter connections have ingredients that pair much better than those with longer connections.

That’s about it! There’s so much more that can be done with this application, but it’s going to have to wait for a bit.

Please tweet about Flavorwocky if you like it or just want me to win. Voting also helps!