Expression Based PathTransitions in JavaFX

In JavaFX you are able to animate nodes along a path using PathTransition objects. PathTransitions use Shape objects to describe the path they need to animate along. JavaFX provides various types of Shapes (e.g. Polygon, Circle, PolyLine, Path). The Path shape is interesting in that it allows you to create complicated shapes using various movements called PathElement. Some PathElements are ArcTo, CubicCurveTo, HLineTo, LineTo, MoveTo, QuadCurveTo, VLineTo. Their names imply what they do.

While the PathElemetns are great for descrbing complex paths, I found that I would rather describe my paths using mathematical expressions. All the years of working with graphs in math class have affected the way my mind thinks. Quadratic and trigonometric expressions have a warm and cozy feel to them. As such, I sought to create PathTransitions that are described using mathematical expressions. I describe my solution in this post in the case that anyone wishes to accomplish the same.

To accomplish this, the first thing one needs is a way to solve mathematical expressions, like x*sin(x), or x^2/45, or (x^2)/sin(x-2), or whatever else you can imagine. For this I was lucky enough to stumble upon Lawrence Dol’s Software Monkey web site. Lawrence created a super light Java class, named MathEval, that evaluates mathematical expressions. The class is only 31KB and is very easy to use. I used MathEval to plot the points of given expression.

The JavaFx class Polyline is used to store the plotted points that MathEval solved for and turn them into a Shape object that PathTransition can take as input.

The class I ended up creating is called ExpressionTransitionMaker – sorry, no Javadoc, but you can find the source code here. This class is supposed to be very easy to use. It has two main methods that are worth mentioning. The first is:

This method is used to add expression entries, which consist of an expression with supporting information like the start and end positions on a graph, poll interval, and GraphType. ExpressionTransitionMaker can make three different types of graphs described by this GraphType enum:

The second method worth mentioning is:

Well that’s about it. There is one or two more public methods in ExpressionTransitionMaker that a user might find handy but was left out for brevity. I created a simple little app that tests out the ExpressionTransitionMaker and can be found here. The app can be played over a browser and it allows you to enter in multiple expressions which are used to animate an image along the screen. 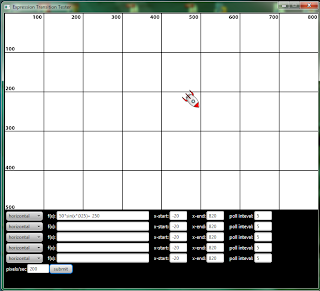 If you have any feedback to provide I would love to read it.

Reference: Expression Based PathTransitions in JavaFX from our W4G partner Jose Martinez