Have you ever wonder what is this -client or -server switch when you run your java app? e.g.:

that are also displayed in the Help of the java.exe e.g. where options include: 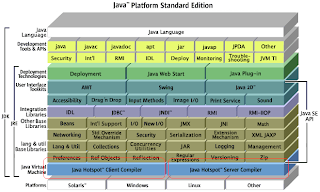 What’s the difference between the -client and -server systems?

These two systems are different binaries. They are essentially two different compilers (JITs) interfacing to the same runtime system. The client system is optimal for applications which need fast startup times or small footprints, the server system is optimal for applications where the overall performance is most important. In general the client system is better suited for interactive applications such as GUIs. Some of the other differences include the compilation policy,heap defaults, and inlining policy.

According to “The Java HotSpot Performance Engine Architecture“:

The JDK includes two flavors of the VM — a client-side offering, and a VM tuned for server applications. These two solutions share the Java HotSpot runtime environment code base, but use different compilers that are suited to the distinctly unique performance characteristics of clients and servers. These differences include the compilation inlining policy and heap defaults.

The JDK contains both of the these systems in the distribution, so developers can choose which system they want by specifying -client or -server.

Although the Server and the Client VMs are similar, the Server VM has been specially tuned to maximize peak operating speed. It is intended for executing long-running server applications, which need the fastest possible operating speed more than a fast start-up time or smaller runtime memory footprint.

The Client VM compiler serves as an upgrade for both the Classic VM and the just-in-time (JIT) compilers used by previous versions of the JDK. The Client VM offers improved run time performance for applications and applets. The Java HotSpot Client VM has been specially tuned to reduce application start-up time and memory footprint, making it particularly well suited for client environments. In general, the client system is better for GUIs.

The Client VM compiler does not try to execute many of the more complex optimizations performed by the compiler in the Server VM, but in exchange, it requires less time to analyze and compile a piece of code. This means the Client VM can start up faster and requires a smaller memory footprint.

Note: It seems that the main cause of the difference in performance is the amount of optimizations.

The Server VM contains an advanced adaptive compiler that supports many of the same types of optimizations performed by optimizing C++ compilers, as well as some optimizations that cannot be done by traditional compilers, such as aggressive inlining across virtual method invocations. This is a competitive and performance advantage over static compilers. Adaptive optimization technology is very flexible in its approach, and typically outperforms even advanced static analysis and compilation techniques.

We run the following code with both switches:

Note: The code is been compiled only once! The classes are the same in both runs!

It seems that the more aggressive optimazation of the server system, remove the loop as it understands that it does not perform any action!

I met a few actually :) OK. Most of them are medium level, but in the other hand it is not something like ABC that you learn in the University.