Byron is a master software engineer working in the IT and Telecom domains. He is an applications developer in a wide variety of applications/services. He is currently acting as the team leader and technical architect for a proprietary service creation and integration platform for both the IT and Telecom industries in addition to a in-house big data real-time analytics solution. He is always fascinated by SOA, middleware services and mobile development. Byron is co-founder and Executive Editor at Java Code Geeks.

Continuing our series of articles concerning proposed practices while working with the Java programming language, we are going to talk about String performance tuning. We will focus on how to handle String creation, String alteration and String matching operations efficiently. Furthermore we will provide our own implementations of the most commonly used algorithms for Exact String Matching. Many of these algorithms can achieve far more superior performance compared to the naive approach for exact String matching available with the Java Development Kit. This article concludes with a performance comparison between the aforementioned Exact String Matching algorithms.

All discussed topics are based on use cases derived from the development of mission critical, ultra high performance production systems for the telecommunication industry.

Prior reading each section of this article it is highly recommended that you consult the relevant Java API documentation for detailed information and code samples.

All tests are performed against a Sony Vaio with the following characteristics :

The following test configuration is applied :

Many people do not have performance in mind when they utilize String objects. Nevertheless misuse of String classes can significantly degrade the performance of an application. The most important things you should keep in mind are :

Our proposed best practices when working with String classes are the following :

The Java language lacks fast String searching algorithms. String “indexOf(…)” and “lastIndexOf(…)” operations perform a naive search for the provided pattern against a source text. The naive search is based on the “brute force” pattern first exact string matching algorithm. The “brute force” algorithm consists in checking, at all positions in the text, whether an occurrence of the pattern starts there or not. Then, after each attempt, it shifts the pattern by exactly one position to the right. Nevertheless several other algorithms exist that outperform by far the “brute force” algorithm in both speed and efficiency.

Applications require two kinds of solution depending on which string, the pattern or the text, is given first. In our case, the pattern is provided beforehand, meaning that we always search for a provided pattern against an unknown text. For all applications that need Full Text Search (Text First Exact String Matching) a different set of algorithms is needed that provide indexed scanning. Apache Lucene is one of the most popular text search engine libraries that implement the latter family of algorithms. Nevertheless this article will only investigate algorithms of the first kind.

Thanks to the great work, a book named “Exact String Matching Algorithms”, of Christian Charras and Thierry Lecroq from Laboratoire d’Informatique de Rouen – Université de Rouen, we were able to implemented in Java the most commonly used algorithms for Exact String Matching, where the pattern is given first. The list below displays the algorithm name as provided on Christian Charras and Thierry Lecroq book followed by our algorithm implementation “code name” in parenthesis. For further information on each and every algorithm please click on the appropriate link so as to be redirected to the relevant section of the “Exact String Matching Algorithms” book.

In the initial version (1.0.0) of the Exact String Search Algorithm suite, for every algorithm we have implemented three utility operations :

Below is an example use of the Boyer-Moore algorithm (BM) :

In the first case we compile the pattern and perform the search in two distinct steps. This approach is appropriate when we have to search multiple source texts for the same pattern. By compiling the pattern once we can maximize performance results due to the fact that the preprocessing is usually a heavy operation. On the other hand, for once of searches, the second approach provides a more convenient API.

We must pinpoint that our provided implementation is thread safe, and that we do not currently support regular expressions in patterns. 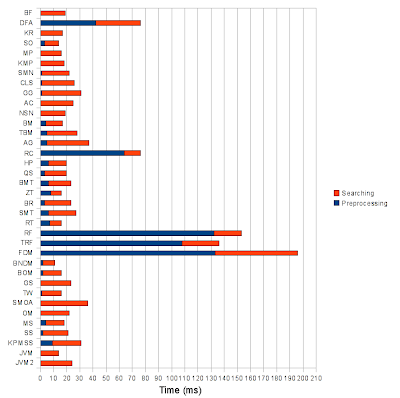 The horizontal axis represents the average time in milliseconds every algorithm needed so as to preprocess and parse the provided text. Thus lower values are better. As you can see Java naive implementation (indexOf() approach) outperforms the Java Matcher “find()” approach along with almost all our search algorithm implementations. In other words, when you are dealing with small to medium sized string searches it is preferred to implement something like the code snippet we provided above rather than use a more sophisticated String search algorithm. On the other hand when dealing with large to very large documents one of the fastest algorithms from our suite will surely come in handy!

You can download version 1.0.0 of our Exact String Search Algorithm suite distribution here

Hello,
Great work, many thanks for that,
I have just a comment about the good results obtained using the default java string matching.
In fact, I have read somewhere (don’t have the reference for the moment, but should be easily googled) that the default java string matching/searching algorithm is based on the Knuth-Morris-Pratt algorithm, and as shown in your last figure, the results of both are pretty much the same.
That’s all, and thanks again,
Best regards

Looks pretty cool! I’d like to look at the source but the dropbox link is dead.

Hello Nathan, the project is hosted on Sourceforge, you may find it here https://sourceforge.net/projects/jstringsearch/