Recently, I had a chance to present the subject at the local IT community meetup. Here is the basic presentation: 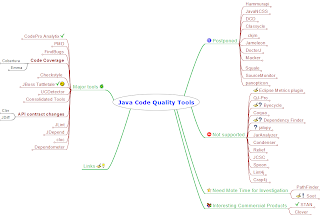 But, I think I need to cover this subject more deeply. This blog post should be something like start point for further investigation in this direction.

This list includes open sourced and free tools. I intentionally have excluded commercial tools. I’m sure there are much more tools. In case your know some of them which isn’t listed here please add comment to this post.

Reference: Java Code Quality Tools – Overview from our JCG partner Orest Ivasiv at the Knowledge Is Everything blog.

Interesting article. Obviously some of these areas overlap, what would be your preferred setup for a new open source project?

You forgot the only valid measurement tool. The number of tears from code that made me cry: http://www.ctmmc.net

Great survey! You can also try this tool that displays the public resources of a library and calculates a ratio of usage between two Jars: http://trimatek.org/deep

You can write your own rules using JavaParser and JavaSymbolSolver. Both are open-source

Nice share thanks for the info in quality control