One of the more recent Android ADT updates added Android Lint. Lint will check your Android project for simples things that you can change to improve your app. Lint notifies you about things like:

And a few other things. When I ran Lint the other day, I found one other performance tweak that was suggested by Lint. I was told that “for maps where keys are of type integer, it’s typically more efficient to use the Android SparseArray API”. 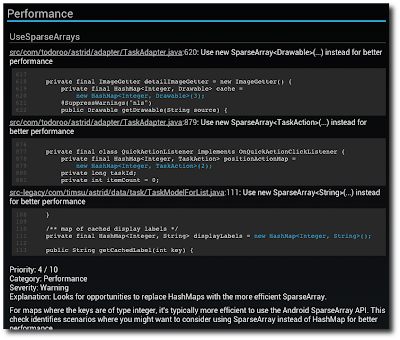 But when should A SparseArray be Used?

After checking out the optimization a bit more, I couldn’t find a ton of data that says when a SpraseArray should be used over a Hashmap. Should it be used in every case where a Hashmap could have been used? What about if the array is small? How about if the range of values is under 500?

These are the kinds of questions I tried to answer with the experiment below. But before I jump right into the experiment details, it’s good to have some background information on Hashmaps and SparsArrays.

What is a Hashmap?

A Hashmap is a data structure that holds “key value” pairs. It has a constant time, or O(1) time requirement for retrieving an element from the array. This means that it takes the same time to pull any element from the array, regardless of the size. This is possible by using a hashing function, which generates the array indices, given the input key.

A Hashmap is used (in this case) to map Integer keys to an object.

To understand what a SparseArray is, it is helpful to understand how a standard array works. An array is really just a continuous block of memory. The size of this block corresponds to how many elements the array can hold. For example, if a object requires 10 bytes of storage, and the array is created that can hold 5 of these objects, then the array has 50 byte memory block. Each of the objects in the array is given a 10 byte segment. By using the array index, you are actually moving through the array’s memory, 10 bytes at a time.

A problem comes into play when you want specific indices to map to specific objects, and they don’t cover every indices. For example, if you want an object at indices 4 and 5, but you don’t care about indices 1, 2, or 3, then you wind up wasting memory with an array.

Why use a SparseArray over a Hashmap?

As you can see from the SparseArray page, and the Lint warning, the statements here are pretty vague.

Is a SparseArray better than a Hashmap all the time? If not, when does a HashMap become more efficient than the SparseArray?

To compare the two data structures, I designed a quick and simple test (and app). The bench marks gauge how long it takes to:

To handle this experiment, I wrote a simple Android app that contains a basic UI, and a few Async Tasks to do the above experiment (available on Github soon).

For the experiment, I tested two different variables:

The app was run on a Samsung Galaxy 2 with Android version 2.3.4. 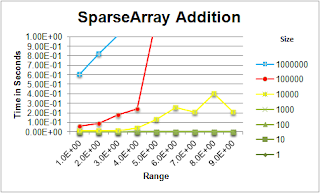 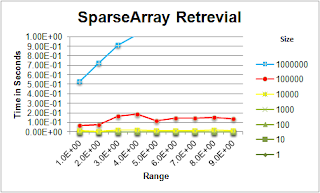 The SparseArray is a very quick data structure for sizes of 10,000 and less. If you are pulling data from your array considerably more than adding to it, you can get away with a size of 100,000. It starts to slow down a bit with the jump to 1,000, but nothing too surprising. 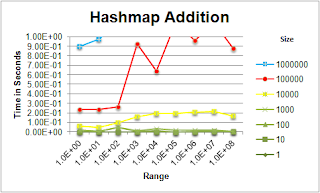 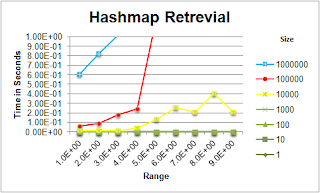 So it seems the Hashmap and the SparseArray are very similar for data structure sizes under 1,000, with any range you would like. The performance gains at a size of 1,000 would likely be very small, if any.

At a size of 100,000 (in red in the above graphs), the Hashmap loses performance very quickly, at the 100 range mark. However the SpraseArray is still able to retrieve elements in this range with comparable efficiency. It also breaks down after the 1,000 range limit has been hit through.

So with all the fun stuff above, I walk away with a few new theories:

(0 rating, 0 votes)
You need to be a registered member to rate this. 7 Comments Views Tweet it!
Do you want to know how to develop your skillset to become a Java Rockstar?
Subscribe to our newsletter to start Rocking right now!
To get you started we give you our best selling eBooks for FREE!
1. JPA Mini Book
2. JVM Troubleshooting Guide
3. JUnit Tutorial for Unit Testing
4. Java Annotations Tutorial
5. Java Interview Questions
6. Spring Interview Questions
7. Android UI Design
and many more ....
I agree to the Terms and Privacy Policy
Sign up

The actual reason of using SparseArray over HashMaps is not related to write/read performance of the data structures but rather to the fact [Long]Sparse[Int|Boolean]Array avoids autoboxing. This can be a huge performance boost knowing the GC won’t need to collect almost useless Integer/Boolean and Long objects.

You can read about this looking at these slides (https://speakerdeck.com/u/cyrilmottier/p/optimizing-android-ui-pro-tips-for-creating-smooth-and-responsive-apps?slide=5)

Nice article and observations, but IMO it’s better to use ‘capacity’ word instead of ‘size’ for better explanation and understanding because of confusion with actual data structure size depends on how many objects were added to it.

I think you need to do another test with more values and a finer clock. I can’t see if HashMap and SparseArray are comparable with less than 1000 entries, since the graphs are flat on the bottom (except for a hump somewhere on the HashMap insertion).

Sometimes people need to access their datastructure a LOT which means “very quick” isn’t good enough. Which one is faster when using 100 entries?

If you only have 100 items and are mapping int’s to pretty much anything, a primitive array would be the structure of choice for speed. There isn’t too much memory waste at such a small scale and it would be faster than either SparseArray or HashMap. Honestly it really depends on what you are optimising for, speed or memory usage. I’d replace a primitive array with either of these structures when I had a larger data set, wanted to save memory, and needed it to be reasonably fast. If memory isn’t a problem as with your case, primitive arrays are… Read more »

Thanks for this. But what if I have to key on a String and have to store thousands of key value pairs? What can I use in this case?

Use a Hashmap. a HashMap

1. “For arrays larger than 10,000, if you are adding more than retrieving elements, try the SparseArray” –
Its just the opposite, SparseArray performs better in retrieval than adding in 10000 mark.
2. “For smaller arrays (under 1,000) the performance of the SparseArray and the Hashmap are very comparable” – And SparseArray takes up a lot lesser space.