Introduction to BTrace for Java applications

The aim of this article is to learn how to dynamically trace/observe running Java applications (JDK 6+) using BTrace without changing the code and configuration params of the applications.

BTrace is an open source project that was started in 2007 and was originally owned by two people – A.Sundararajan and K. Balasubramanian. It gained fame thanks to Java One 2008 conference.

BTrace helps us to pinpoint complicated code problems in the application. The problems that can be solved using BTrace include code bugs, unpredictable flows, concurrency problems and performance problems that happen under specific and usually hard to reproduce circumstances.

BTrace dynamically (without restarting application) instruments (changes) bytecode of an application in the way that programmer defines. The goal of the instrumentation is to see what happens in a specific area of the code. If used beyond this scope it may harm applications’ flow and therefore is forbidden by a validator.
For example let’s try to solve following problem – an important file gets deleted occasionally once a day. We want to find the code that does this. Therefore we would like to change ‘delete’ method of java.io.File and print a stack trace of the calling thread if the file name fits. With BTrace we can do this by writing a short and straightforward Java code. 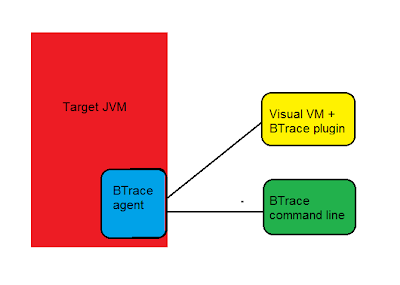 In Target JVM there is a dynamically inserted BTrace agent (using attach API). BTrace client (either BTrace Command Line or Visual VM with BTrace plugin) sends commands to the agent and gets responses. BTrace agent instruments classes that are being loaded into Target JVM and reloads classes that have already been loaded.

Abilities and limitations of BTrace

BTrace community consists de facto of a single developer that works regularly on the project. Therefore don’t expect too much improvement and many new features in the next releases. (This is a good opportunity to contribute to the project as each developer will enhance the development significantly).

Documentation of the project should be significantly improved – I found myself guessing many times while integrating this framework into the existing frameworks at my job. BTrace forum is a good way to get answers about the framework.

In order to understand how the magic of BTrace works, knowledge in three fields is required – ‘Java Agents Development’, ‘Bytecode manipulation in java’ and ‘Java attach api’. I may write about some of these fields in the future.

Reference: Introduction to BTrace from our JCG partner Art Gourevitch at the The Art of Java blog.